If you’re like me, you want to keep your firearms away from interested family members or nosey neighbors. It makes good sense. So you start to layer the locks and the doors, any obstacles that you can think of. But then you think, “what if burglars break in? How quickly can I get to my gun?”

Although security and speed of access often seem to be opposites, if you want to store a single handgun here is a gun safe that strikes a balance between those considerations. 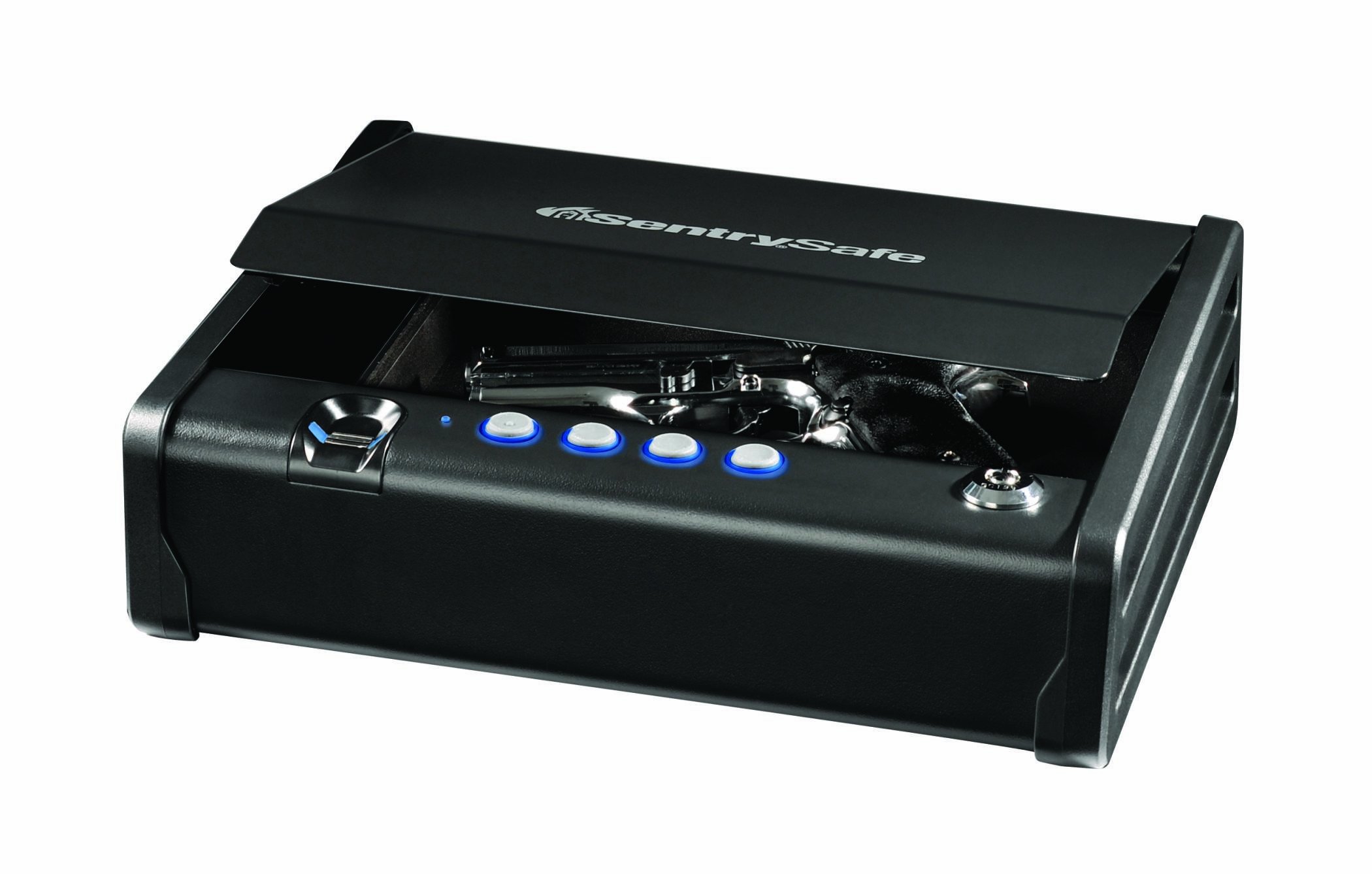 A positive for this gun safe is that it has three ways of opening it.

• You can program the fingerprints of two different people, perhaps you and your partner. After this, you hit one button to wake the reader, swipe your finger, and you’re in.
• If you don’t like fingerprint readers, you can program a combination using the 4 rubberized buttons on the lid. In fact, it’s probably sensible to do this as a secondary method in case the fingerprint reader fails.
• Finally, the safe comes with two override keys that open the safe is all else fails.

What if a terrified family member is clutching your hand or if you have your phone in your hand? No problem. A compressed-gas-powered strut opens the lid so that only one hand is needed to draw your gun)
Both the fingerprint reader and the combination system are silent. There’s no beeping or buzzing to reveal your presence in the event of intruders. And, when pressed, the combination buttons are backlit for nighttime use.
The electronics for the biometric and combination systems do need four AA batteries which are not supplied.

Sturdy and Roomy
The 12-gauge steel is thicker and heavier than the steel used on many other safes in this price range and at just over 12lbs when empty, the safe has a comforting solid feel. The lid is also shaped and designed to offer no entry points for tools to pry it open.
The foam-padded interior is approximately 9.5” x 6.5” x 2.2”. This gives enough room for most handguns and, depending on the size of the pistol, perhaps a magazine or two plus a box of ammo.

Use in or Out of a Drawer
Because the safe weighs just over 12 lbs, it could be argued that it is portable and could possibly be kept in a car if you wanted to buy a security cable.
However, it is actually designed for use in the home. The top opening lid with one-handed access allows the safe to be stored in a drawer for additional concealment, and the pre-drilled holes in the bottom of the safe (with included hardware) mean the safe can be fixed in the drawer. Alternatively, it could be secured on a shelf or table-top, or to the floor, wherever you prefer, but it isn’t designed for wall-mounting.

There are comparatively few negative reviews compared to the total, but they all tend to revolve around poor battery life, the combination buttons being too “squidgy” for accurate entry of the combination in a hurry, and failure of the fingerprint reader after frequent use.
These are all failures that would prevent quick entry in an emergency, but because they tend to appear after two to three months I couldn’t confirm the validity of the claims, and there are just as many, if not more reviews that argue against these criticisms.

Any complaints about this safe are overwhelmingly rejected by positive reviews and seem easily fixed. For example, practice in firmly pressing the rubberized buttons appears to remedy the complaints of “squidginess”.
The failure of the fingerprint reader, after some investigation, seems to be a problem with the technology, albeit an occasional one, rather than with this particular safe. So it is not clear that choosing another biometric safe would lead to greater reliability.
Unless fixed to something secure, this gun safe could be carried away. It satisfies most home needs, and would deter most curious passers-by or, perhaps, sneak-thieves with a few hand-tools . . . And the multiple entry methods are a definite plus.