For people who have more than one handgun, or have other valuables to store along with their gun, many of the gun safes on the market are just too small. This product from Stack-On may be a good answer. It’s not tall enough for long guns, but can easily house multiple handguns and accessories along with some more of your stuff. 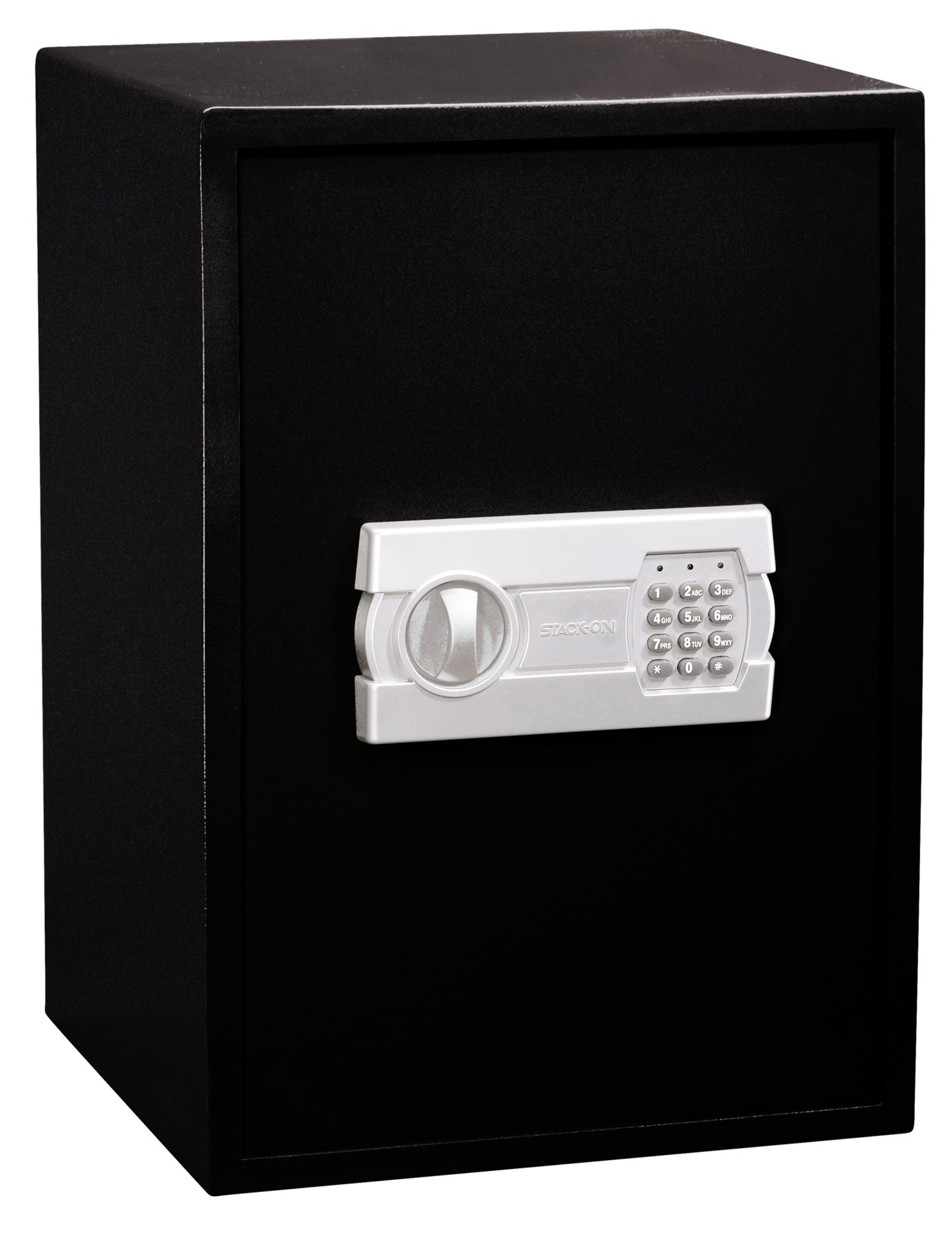 Because this safe has two foam-padded shelves that are removable, you can change the internal layout to suit your needs. And at 19.5” x 13.6” x 12.8” there is plenty of room inside for handguns, accessories, jewelry, documents, whatever you want.
The pry-resistant steel door has two steel locking-bolts controlled by an electronic numerical keypad. Because of this and the hinges being concealed inside the unit, it would take a determined thief some time to get into this safe.
The keypad is easily programmed with a personal code of anywhere from 3 to 8 digits, and has a silent mode for those who prefer stealth or who just find beeps annoying.
In case of keypad failure, usually due to a low battery, a back-up key is provided. The keyhole is concealed behind the keypad.

Not Portable
This safe is not intended for someone who wants to move it frequently. Because it weighs 45lbs and is somewhat bulky, it could be awkward for someone to carry this safe off, but it is possible. For that reason, it would be better to use the included hardware and pre-drilled holes allow to attach it to a floor or a shelf.
You could keep this safe at your bedside, but because of its size and because it might contain valuables other than guns, it might be better concealed in a closet, or possibly under a desk. This means that, although relatively quick entry access is possible, the safe may physically be farther away from you than other models would be in an emergency.

At time of writing, this safe had reviews were positive with the construction and security of the safe being praised, although many did point out that despite its appearance being similar to what is traditionally thought of as a safe, it is actually more of a lock box.
The negative reviews tended to talk of keypads failing to operate. This is a concern, but appears to be infrequent but consistent across all products that use this type of technology.

Although, many people buy this product as a “gun safe” it is more versatile than that, and may be more suited to people who have many things to store securely. That is not meant as a criticism but if using it for storing other valuables as well as your guns, hiding the safe may be a consideration, and this may lead to proximity in an emergency becoming an issue.
If, however, your needs are more toward the security end of the spectrum and less toward the speed of access end then this may be a great choice for you.
Many people buy this safe because, it is affordable compared to its competitors, and there is a biometric version with a fingerprint reader available.